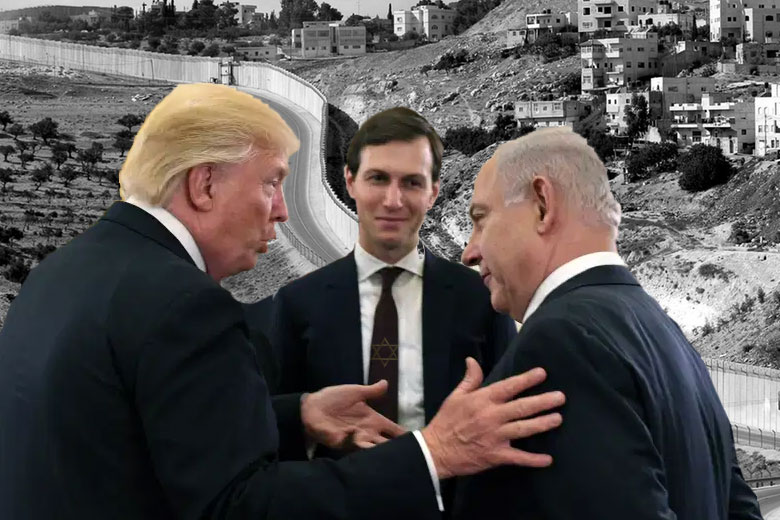 Yesterday Donald Trump and Israeli PM Netanyahu unveiled the Jewish “peace plan” for Israel and Palestine. The plan, which Trump deceptively refers to as the “deal of the century”, was written by what sounds like a Jewish law firm – Kushner, Greenblatt, and Friedman.

All three of these authors of the plan, Trump’s son-in-law Jared Kushner, Jason Greenblatt, and Trump’s bankruptcy lawyer and current US ambassador to Israel David Friedman are Orthodox Jews who believe the Hebrew Bible/Old Testament is the Word of God. Friedman is even a Jewish priest of the Kohanim caste!

Since the ungodly Hebrew Bible/Old Testament is the foundation for the thinking of these three peace plan authors, it’s important to objectively look at what their Hebrew Bible/Old Testament teaches. It’s very unfortunate that in the 21st century we have to concern ourselves with Bronze Age superstitions being applied to the real world. But, as Western philosophy teaches, we must see things as they really are so we can make the best decision on how to deal with them.

This ungodly anti-Gentile teaching is found at Leviticus 25:44-46. It falsely claims God told the Jews:

Bob Johnson is a freelance writer in the Tampa area of Florida. He was raised Roman Catholic, but after a stint in Marine Corps infantry and reading Thomas Paine’s The Age of Reason he became a Deist.

In 1993 he founded the World Union of Deists, and in 1996 he launched the first website devoted to Deism. He is the author of God Gave Us Reason, Not Religion, Deism: A Revolution in Religion, A Revolution in You and An Answer to C.S. Lewis’ Mere Christianity. He has also written the introduction to Thomas Paine’s The Age of Reason, The Complete Edition and Principles of Nature by Elihu Palmer.

deism.com
DISCLOSURE: All content herein is owned by author exclusively.  Expressed opinions are NOT necessarily the views of Veterans Today Network (VTN), authors, affiliates, advertisers, sponsors, partners or technicians. Some content may be satirical in nature. All images within are full responsibility of author and NOT VTN.