Home Domestic News Trump’s Poker Game: What is going on? 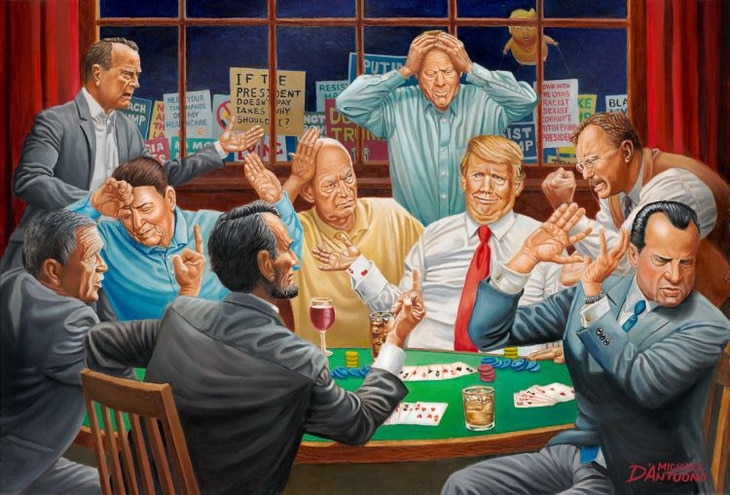 The game he is playing is NOT for $$. It is for his safe exit. TRUMP knows he is in deep multi-dimensional legal jeopardy and this defines his every action. Will power let him off the hook?

But does he have the cards? No, he does not.

His bluff after the flop was called in court. More bluffs coming. They will need to be called on.

We The People cannot allow this mobster to bully the USA into a deal to save his ass by threatening our democracy. His play is junk. Call him on it.

His contemptible, treasonous, seditious assault on the stability of our political compact is NOT a play for enrichment but to use chaos and threat to the foundation as leverage to trade for a safe exit.

NO DEAL! We cannot flinch this time. This game must end with his public destruction.

*This post inspired by the son of a federal prosecutor who deals in this arena daily. Thank You for your learned tweets Mr. Edward Norton.

This song was written about SORE LOSER Donald Trump, former U.S. President, who lost the 2020 US Election and went full belligerent claiming he won and telling his supports lies about election fraud while filing suits that got thrown out of court for lack of evidence making a mockery of the USA and Democracy.

Sore Loser, You’re such a friggin coward
Sore Loser, Barricaded in your tower

Sore Loser, What the hell is wrong with you
Sore Loser, Don’t you have something better to do
Sore Loser, Go away you psychopath

Johnny Punish, the artist, is the founder and General Manager of VT. He is also a writer, global citizen activist, visionary, musician, artist, entertainer, businessman, investor, life coach, and syndicated columnist. In business, he’s known by the name John Allen

He has over 100 original songs penned, recorded, produced and registered with ASCAP with several songs placed in feature films. His music is promoted worldwide and played on all digital networks and net radio.

https://www.johnnypunish.com
[email protected]
DISCLOSURE: All content herein is owned by author exclusively.  Expressed opinions are NOT necessarily the views of Veterans Today Network (VTN), authors, affiliates, advertisers, sponsors, partners or technicians. Some content may be satirical in nature. All images within are full responsibility of author and NOT VTN.