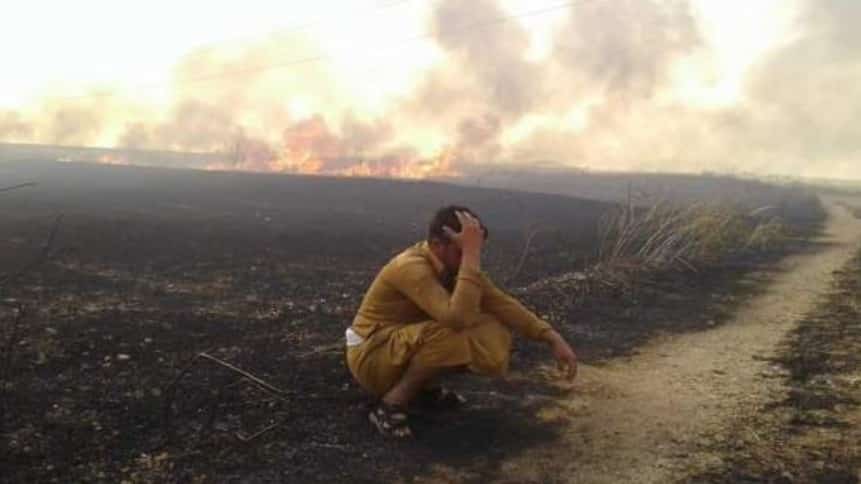 Apache helicopters of the US occupation forces flew low Sunday morning, according to residents of the Adla village, in the Shaddadi countryside, south of Hasaka, as they dropped ‘thermal balloons’, an incendiary weapon, causing the wheat fields to explode into flames while the hot dry winds fanned the raging fire.

After delivering their fiery pay-load, the helicopters flew close to homes in an aggressive manner, which caused residents and especially small children to fear for their lives.  The military maneuver was delivering a clear message: don’t sell your wheat to the Syrian government. Head of Hasaka Agricultural Directorate Rajab Salameh said in a statement to SANA that several fires have broken out in agricultural fields in Tal Tamer countryside, as well.

The US illegal bases in Syria fly Apache helicopters.  US President Trump portrays himself as a champion of the American Christians, and he has millions of loyal supporters among the Christian churches across the US.  However, the Christian Bible states in Deuteronomy 20:19 that it is a sin against God to destroy food or food crops even during times of war.

Bread is the most important staple in Syria, and two weeks into the annual wheat harvest, Damascus is keen on securing its supply of grain, while beset by the global pandemic.  On May 4, President Assad said in a meeting with his COVID-19 team that “our most difficult internal challenge is securing basic goods, especially foodstuffs.”

Since the beginning of the US-NATO attack on Syria in 2011, wheat production has fallen from an average of 4.1 million tons per year to just 2.2 million tons in 2019. Syria had been a wheat importer but switched to being an exporter of grain in the 1990s.