“To punish the perpetraitors of insurrection against democracy is clemency; to forgive them is barbarity”  Johnny Punish

I stand 100% with Democracy and the Republic of the United States of America!  Period!

In this light, I confess I have one major issue with what most call the greatest U.S. president in history, Abraham Lincoln.  That is with his reconciliation with the losers. The Confederates got a sweet deal after the U.S. Civil War was over and it was extremely costly to the nation.

Of course, it’s easy to be a Monday morning quarterback 157 years after the fact but it’s clear now, that his apparent move towards clemency and his successor, Andrew Johnson’s, subsequent pro-Confederate positions which welcomed back without consequence those who attacked the nation and caused the deaths of over 618,000 Americans cost the nation dearly. In fact, one can argue that with the Jim Crow laws allowed to fester in the south, it cost the nation another 100-plus years of unnecessary strife.  We could have ended racial inequities in the 1870s and not waited for the civil rights laws of the 1960s.

So with history as the guide, it’s clear that those who have committed crimes against democracy and the Republic of the USA must face the maximum punishment. Without it, the nation will suffer decades upon decades.

Granted, many take the position that the federal government is corrupted from top to bottom.  OK, that’s legit. I agree!  We need massive reform for the 21st century. But there was an election and Sore Loser Trump lost both the popular vote by 7,060,347 (81,284,666 to 74,224,319) and the ridiculously antiquated Electoral College 306-232; which needs to be shelved.

Look, if the majority of the people wanted what Sore Loser Trump was selling, they would have bought it.  That’s how it works.  Being angry about it is NO excuse to overthrow the will of the people. That’s not democracy at all.  That’s just being pissed off that we didn’t get our way.   And that’s not good enough in a civil society.  We gotta do much better than that!  It’s as simple as being a good gracious loser and being a humble gracious winner! A really simple thing to live by! 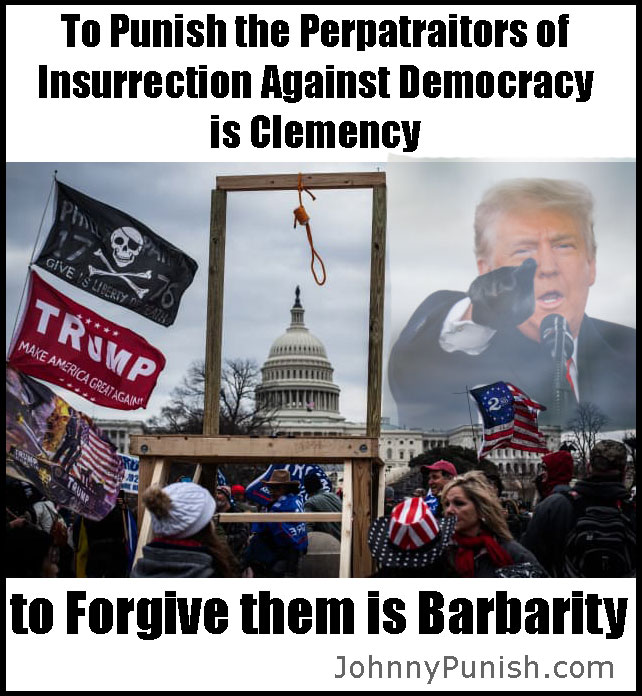 As it stands, the leader of the Insurrection, Sore Loser Donald Trump, has faced NO CONSEQUENCE, and his leadership insider assigns, so far, nothing. The only people who have faced consequences were the vulnerable and gullible peasants who Generalissimo Sore Loser, The Cowardly Draft Dodging Trump, sent in to do his dirty work.

What further demonstrates the pathetic state of this union is the recent revelation that Sore Loser Trump stole the people’s documents and hide them away at his home in Mar-A-Lago. Yeah, he admits it and still no arrest. No wonder he has contempt!  What else is he supposed to think?  He said he can shoot a man in the middle of Times Square and never go to jail. He’s right, so far!

I mean classified documents?  Are you kidding me? I mean, geez us, the Rosenbergs got executed for what Emperor Donald looks to have done. WTF already?  Arrest him!  Or rule of law means nothing!

All this while his daughter and son-in-law walk away at the 11th hour with a $ 2 billion dollar secret Saudi deal while his brainwashed cult parrots the Fox News Tucker Carlson screams about Hunter Biden.  It’s a very bad comedy indeed; CORRUPTION BEYOND BELIEF!

At the end of the war, Lincoln’s policy for the defeated South was not clear in all its details, though he continued to believe that the main objective should be to restore the “seceded States, so-called,” to their “proper practical relation” with the Union as soon as possible. He possessed no fixed and uniform program for the region as a whole. As he said in the last public speech of his life (April 11, 1865), “so great peculiarities” pertained to each of the states, “such important and sudden changes” occurred from time to time, and “so new and unprecedented” was the whole problem that “no exclusive and inflexible plan” could “safely be prescribed.” With respect to states like Louisiana and Tennessee, he continued to urge acceptance of new governments set up under his 10 percent plan during the war.

With respect to states like Virginia and North Carolina, he seemed willing to use the old rebel governments temporarily as a means of transition from war to peace. He was on record as opposing the appointment of “strangers” (carpetbaggers) to govern the South. He hoped that the Southerners themselves, in forming new state governments, would find some way by which whites and Blacks “could gradually live themselves out of their old relation to each other, and both come out better prepared for the new.” A program of education for the freedmen, he thought, was essential to preparing them for their new status. He also suggested that the vote be given immediately to some African Americans—“as, for instance, the very intelligent, and especially those who have fought gallantly in our ranks.”

On the question of reconstruction, however, Lincoln and the extremists of his own party stood even farther apart in early 1865 than a year before. Some of the Radicals were beginning to demand a period of military occupation for the South, the confiscation of planter estates and their division among the freedmen, and the transfer of political power from the planters to the formerly enslaved. In April 1865 Lincoln began to modify his own stand in some respects and thus narrow the gap between himself and the Radicals. He recalled the permission he had given for the assembling of the rebel legislature of Virginia, and he approved in principle—or at least did not disapprove—Stanton’s scheme for the military occupation of Southern states. After the cabinet meeting of April 14, Attorney General James Speed inferred that Lincoln was moving toward a radical position. “He never seemed so near our views,” Speed believed. What Lincoln’s reconstruction policy would have been, if he had lived to complete his second term, can only be guessed at.

On the evening of April 14, 1865, 26-year-old John Wilkes Booth—a rabid advocate of slavery with ties to the South and the flamboyant son of one of the most distinguished theatrical families of the 19th century—shot Lincoln as he sat in Ford’s Theatre in Washington. Early the next morning Lincoln died.

The real truth is that we peasants, all of us, are being bamboozled by the elites in society using what should be a system of government by the people, for the people, and of the people.

But they got us so divided, that none of us can see the corporatocracy grift that is right in front of our faces. Instead, we argue left/right nonsense while the corporate media delivers its daily Panem and Circus. Cicero would be proud of this Rollerball.

At this point, the nation remains in trouble as too many citizens are still on the side of the Trump Confederates putting up his candidates who sell his Big Lie of election fraud. They are the modern-day versions of The Confederates. They must be vanquished not given title and agency in the USA or the USA, democracy is in deep trouble!

Yes, of course, we must deal with a system that is corrupted but we must do it by electing reps that put reform as a priority NOT lip service. It has to be done!

Look, I suspect if Abe Lincoln were with us today, he would agree with my position that placating insurrectionists was a mistake and none of the Confederates should have been given anything of note except the maximum punishment for crimes against the will of the people; no mercy! no agency!

“To punish the perpetraitors of insurrection against democracy is clemency; to forgive them is barbarity”  Johnny Punish

Corruption
Such a great profession
Corruption
Getting paid to spread infection

Everyone’s to blame
And you, a member of the Hall of Fame
So get off my lawn
No serfing allowed on this pawn